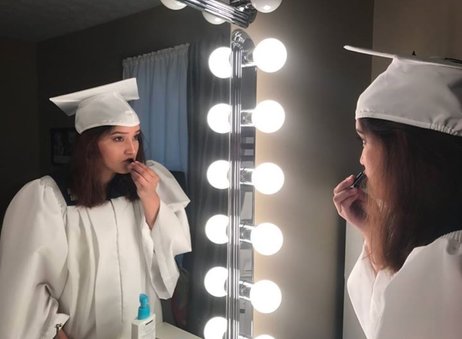 Ana: "I was a Junior when I first started attending PLC and I was a Junior when I gave up all the goals and dreams I could ever possibly have. I didn't have the wealthy parents that had all the connections in the school system and who more than likely attended each other's cookouts and set up play dates with each other's children. As wrong as it is, I was jealous that I didn't have what they did and that I didn't get to go on all those cool and wonderful trips with my friends and family like everyone seemed to and that no matter how hard I tried, I always came up short in everything I've ever done. The only thing I ever had going for me is something not a lot of people know and I'm telling you this because I think you deserve to know.

For over 4 years, I've struggled with major depressive disorder and social anxiety, but you wouldn't know that by looking at me. I wasn't dumb like everyone  thought I was when I first started going to PLC. I didn't fail my classes because I didn't know the material; I failed because I let life get in the way in what I never knew I could do. I let myself be controlled by something I had no idea had the power to destroy everything about me if I let it. I got through my Junior year ignoring my problems and just trying to pretend nothing was wrong, but something was wrong. I let the fire burn out and I was back to square one again. I was once again a minority with no voice in Marietta and nobody to stand up for me. Senior year was about the same as my Junior year. It wasn't any better and I wasn't feeling any better either, but second semester came and my best friend got me in contact with Mrs. Powell and that's when things started to change.

At PLC, we don't really have the opportunity to help our community or be involved in it even though they say they do and that was one of the things I had to leave behind when I left the main campus (I joined and did everything I could) and when Mrs. Powell gave us the opportunity to make a difference in the community, it gave me something to look forward to. When CKC Inc. first started coming to meet with us at PLC, I was behind 2 years in literature and I thought I wasn't going to be able to graduate on time and I gave up more times than I'd like to share because of that, but CKC Inc. changed my view on that. It didn't matter when I graduated as long as I did. When Mrs. Powell would tell us to set a goal for each week, I set a goal to finish at least one class per week and I did it and its thanks to Mrs. Powell because I would have never thought of just focusing on a single class and working on it for as long as I could and I did it. I graduated on time. Mrs. Powell talked to us and let us hear the things we didn't even know we needed to hear. Mrs. Powell gave us advice, talked to us about life, and stood up for every single one of us. And the same night Mrs. Powell called me to ask me if I needed anything for my graduation I cried because she was willing to drive out in the middle of the night to make sure I had everything I needed.

​Truth is, I did choose to not walk. The last few graduation practices were terrible and I didn't want to deal with it anymore. My first day, I got out of my friend's car and the first thing I hear was, "I didn't know we were allowed to bring guests. If I did, I would've brought someone too." That broke my heart and it took every ounce of my strength to keep walking without crying. That's not something I wanted to hear and the funny thing is, it wasn't directed to me. It was directed to my friend and that same person that said it was someone who knew I did in fact graduate. Going inside wasn't any better either. If you look for me in the class picture, you won't find me. I didn't have my cap and gown yet so I wasn't able to take any pictures and somehow I ended up outside by upper A hall crying and telling my sister to pick me up because everything was just going terrible. I dreaded practices and the people there because I have never in my life been bullied and yet here I was feeling like I was being picked on because I didn't go to school with these kids. Bullying exists and I'm so glad we have an angel in the community to fight bullying and to fight for every single PLC student that lost their voice. CKC has helped each and every one of the "Dodo Kids" here at PLC and I can say it's been an honor to meet you, Mrs. Powell."
BACK TO HOME